A Brief History of Election Printing

Wherever you live, you would have seen them already. Lots of them.

Some are A4, some smaller, some much bigger. They’re on lamposts, billboards and in living room windows. Bold colours, big fonts and someone grinning awkwardly back at you. Most of us take no notice of them, but for others they can make all the difference.

With the 2019 election upon us, here at CSD Print we’ve been busy with plenty of orders for campaign posters, placards and banners.

We’re always intrigued by the different approaches that parties take with regards to design and messaging. This election looks like one of the most finely-balanced for a long time, so the parties have had to get creative with their campaign materials in order to grab every precious vote.

After 30 years in the business we’ve done a lot of election printing jobs, from Correx boards for national parties to PVC banners for local councillors. In that time we’ve seen plenty of changes to election printing as new design and print technologies have evolved.

With that in mind, we thought we’d take a closer look at the evolution of election posters in the UK, from the end of the 19th Century right through to the present day.

Suffrage in the United Kingdom was restricted for much of the 19th century, excluding most of the population from voting in elections. Printing technology was also fairly primitive. In those circumstances, it didn’t make sense for political parties to put resources into printed election materials.

This notice from Chester in the late 1850s shows just how limited election printing was back then. 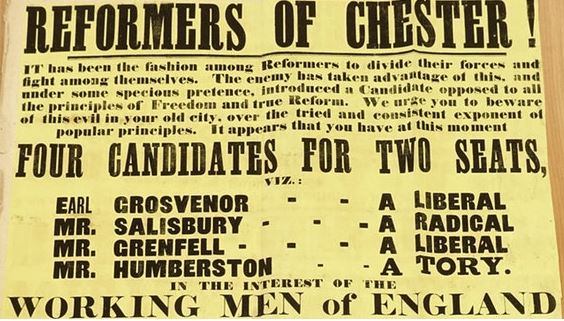 Towards the end of the Victorian era, though, new steam processes brought printing to the masses, allowing paper to printed in numbers that were never before imaginable. At the same time, an increase in voting population with the Representation of the People Act in 1884 was followed by calls for universal suffrage as the new century approached. Election printing was about to take off.

Illustrations, colours, a range of typefaces. In just a couple of decades printing had made huge strides. Political campaigners now had more tools at their disposal and could make a bigger impact than ever before.

This famous poster from the early 1900s is one of the first glimpses into the power that print would hold over politics in the coming century. 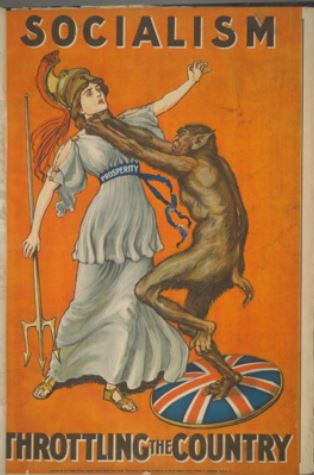 The First World War changed the course of the 20th century. As a result of post-war reforms, the electorate increased from 7.7 million to 21.4 million as the vote was opened up to all men over the age of 21 and women who contributed to the war effort.

Here we see an example of a poster from the 1918 general election, the first after post-war reforms. Despite the availability of coloured printing, this one makes use of black and white for added impact. 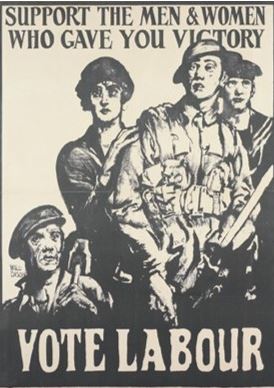 Equal suffrage was introduced in 1928, giving the vote to all men and women over the age of 21. As a result, female voters made up the majority (52%) of the electorate for the first time ever.

Political parties were now acutely aware of the need to appeal to women. 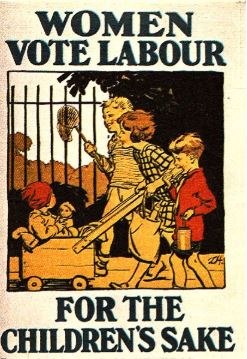 John Armstrong’s striking poster is a great example of how printing techniques were able to bring artwork to life for as many people as possible. The illustrations and depth and variety of colours were a result of advances made during the Second World War, when print was a key component of the war effort on all sides. 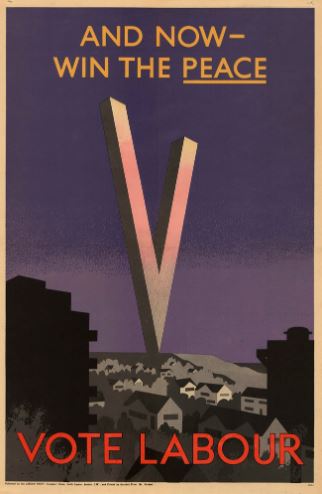 Offset printing started to make strides from the start of the 1950s, expanding the range of shapes, colours and typefaces which could be used. This also made colour printing a lot cheaper, while the quality of printing improved significantly. Photographs could also be used for the first time as opposed to illustrations.

Here we see Labour making use of the new techniques and once again appealing to mothers and families as the country looked to rebuild after the Second World War. 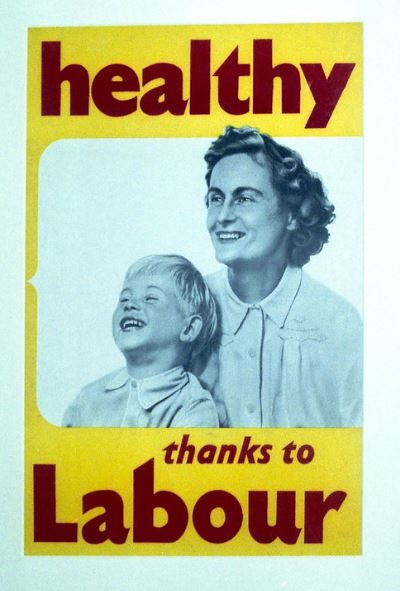 Printing as an industry really began to boom in the 1960s. There were over 4,000 firms in the British Federation of Master Printers by the middle of the decade. (http://britishletterpress.co.uk/history-and-reference/the-printing-industry-in-1965/)

Political parties continued to make use of photographs in their election posters. This one here from Labour could also be the first recorded use of the thumbs up emoji! 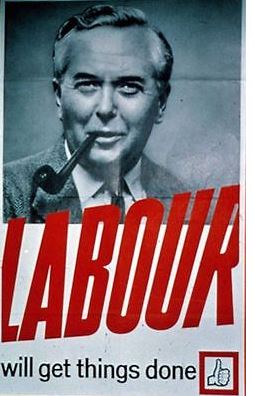 One of the most effective elections print campaigns of all time was also one of the most simple. Before the Conservative’s ‘Labour Isn’t Working’ billboard, print during elections was generally the realm of large posters and placards.

Designed by Saatchi and Saatchi, the campaign only ran in 20 locations but left a long-lasting impression – in 1999 it was voted poster of the century by a jury of ad people assembled by the advertising industry magazine Campaign.

As this BBC article summaries:

“Suddenly, campaign ads, which had previously been modestly-proportioned fly-poster style efforts became 48 sheet billboards displayed in prominent High Street locations, where they could compete for eyeballs with major consumer brands.”

The advancement of graphics programmes in the 1990s made the manipulation of images even easier, opening up opportunities for political campaigners to let their creativity run wild.

This effort from the Conservatives a few years ago is an image that’s hard to forget! 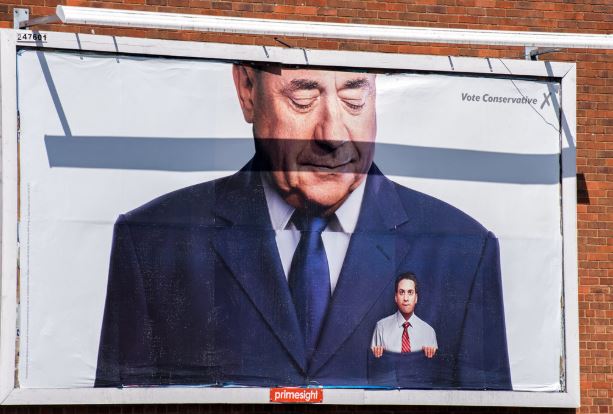 Election campaigns in the internet age – is print still relevant?

Parties are now focusing even more resources and channeling a far bigger chunk of their election budgets into campaigning online. Take Labour, for instance, who recently spent £15,000 on Snapchat advertising. As campaigns move increasingly from the physical to the digital space, what does the future hold for election printing?

If our recent orders are anything to go by, printed election posters, placards and banners still play a huge role in any election campaign.

As the bigger parties focus their efforts online, smaller parties can compete by filling the space left on high streets and hoardings up and down the country with their own printed materials.

Then consider the fact that we’re becoming increasingly distrustful of political information we see online. Printed materials are still considered more trustworthy and more likely to influence our decisions.

We’ve been printing election materials for over 30 years. Our extensive range of print solutions can help you get your campaign message across loud and clear.

*Copyright Declaration. Every attempt has been made to source images free of copyright. If we have mistakenly used an image under copyright and you are the owner, please contact us and we will be happy to remove the image.

Thank you for your interest in downloading our PDF Brochure. Please enter your details below to download the document.